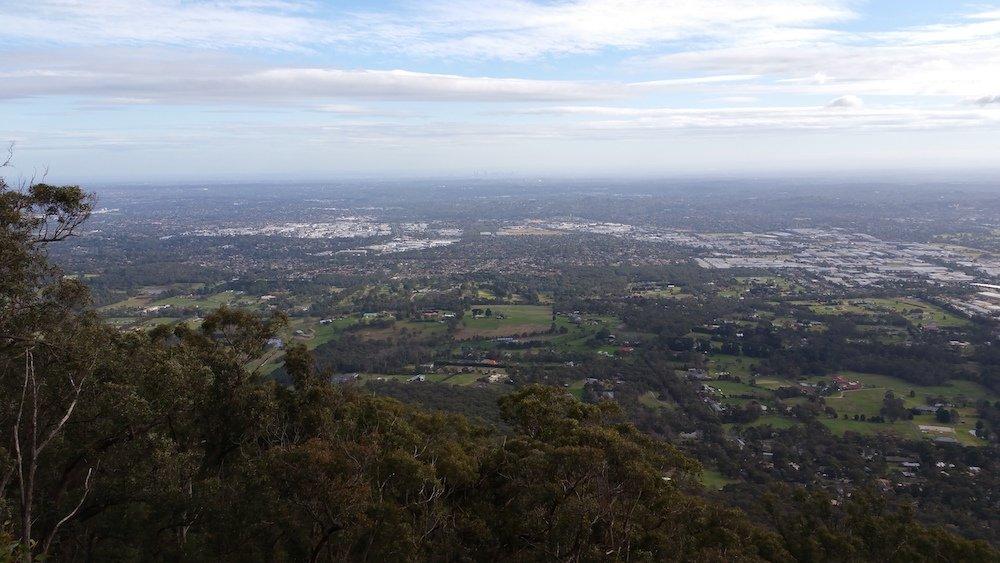 The views over Melbourne and the Bay from Burke’s Lookout & Kyeema Track in the Dandenong Ranges are simply stunning. It is a top viewpoint of Mt Dandenong, but it does involve a short walk from the car park located nearby on Osprey Track just off Ridge Road.

From this location, you can see the Melbourne skyline, Port Phillip Bay and spectacular 360-degree views of the mountain ranges as far as the eye can see. It’s rated one of the best lookouts of Melbourne’s Dandenong Ranges. This hidden gem is located in the serene dense forest of the Dandenong Ranges National Park. Burke’s Lookout & Kyeema Track is on the bucket list of many tourists to the area.

Alternatively, you can incorporate the short walk to the lookout with a longer walk if you choose to take your time and spend a day in the Dandenongs exploring some beautiful walking tracks.

One of these is a track known as the Kyeema Track, named after the Australian National Airways Douglas DC-2 airliner that crashed into Mt. Dandenong in 1938. The airliner was flying from Adelaide to Melbourne and as it commenced its final approach to Essendon Airport through heavy fog, it crashed into the western slopes of Mount Dandenong (which is also known as Mount Corhanwarrabul), instantly killing the 18 passengers who were on board.

This accident was the catalyst for great change in Australia’s air traffic control systems because the passengers on board the doomed flight were members of the Government and prominent business leaders. A far more sophisticated system was set up after this accident, and a memorial plaque can be found on the Kyeema Track.

Both Burke’s Lookout & Kyeema Track are only a 10-minute stroll from Villa d’Amour so there is no need to drive if you are going directly there. Also keep in mind that on New Year’s Eve, Burke’s Lookout is a popular location for people to visit to view the spectacular fireworks display in Melbourne, so much so that there are more cars than car parks on this night, so walking from Villa d’Amour is the easiest way to get there.

Download your essential guide to exploring the Dandenongs and ensure your next visit is simply amazing!